Become an Undercover Agent and be a part of the Cultistorm Universe!

We would like to offer a very special opportunity for the most dedicated of Investigators: joining one of the most dangerous operations of the Agency and fighting as an undercover agent within the ranks of the Cultists.

You can join this mission by pledging for the special “Undercover Agent Pledge” – but places are limited!

The first 13 brave fighters will have the chance to join the ranks of the undercover agents. We will require mugshots from the participants, to be illustrated by our graphic designers. In this way you can become part of the Cultistorm universe via the 13 undercover Investigator cards.The aim of this pledge is straightforward: we want to allow our fans and backers to support us to a bigger extent via this pledge. 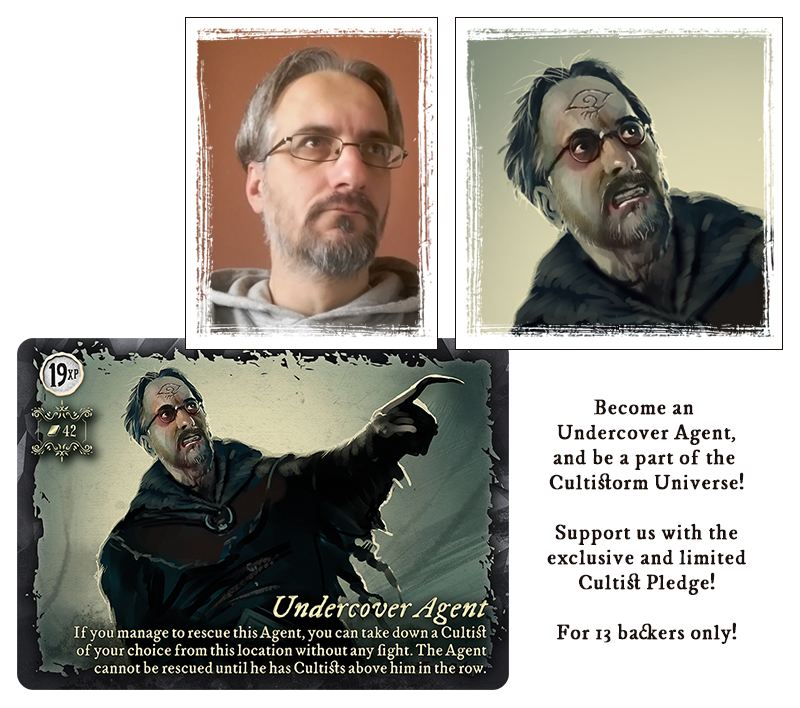 This new minor expansion will be a part of every Cultistorm Game.

It will be intense and exciting.

Here you can see a sample picture of the cast leader, the designer of Cultistorm. Backers of the ‘Undercover Agent Pledge’ will be represented in a similar way.

One more thing: after the campaign we will contact the 13 brave investigators to gather some intel on them, allowing us to write short stories about them, so they could be included in the Script Book of the Narrative expansion.

What do you get with this level?

We would like to offer a very special limited opportunity for 13 backers to become a part of the Cultistorm Universe.

Do you want to be an Undercover Agent?

Join us, because the places is very limited:

ONLY 9 PLACES IS AVAILABLE!