We have designed 5 completely different minigames  set in the universe of Cultistorm. In each of them, Cultists and Investigators have to compete against each other, but always in different ways.

Face-2-Face we specifically designed with Essen Spiel ‘19 in mind. This game was available for purchase at our stand, but those of you who missed out on it can purchase this game as an Add-on of via LATE PLEDGE for 10 USD. 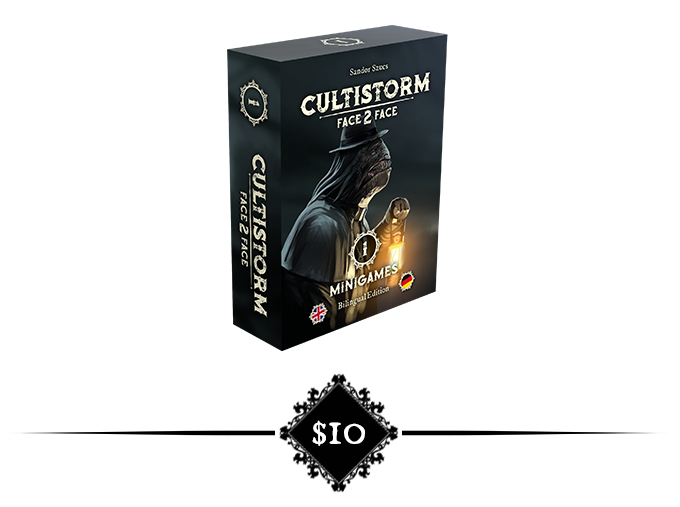 This is also a 2-player game, but this one is a cooperative game. The Investigators must use their joint powers to stop the Cultists’ mad ritual. The game uses completely different mechanics from those in Cultistorm for utilizing the skills of the Investigators and generating skills for the Cultists.

This is a 5–10-player social deduction game where we take part in the dark and secret activities of a Cultist sect. The members of the sect have to embark on expeditions to find artifacts that will help them to open gates to otherworldly dimensions. What the Cultists do not know is that two brave undercover agents have infiltrated their ranks. They must sabotage the Cultists’ plans without being found out.

This is a 2–5-player cooperative game where the Investigators are exploring a randomly generated map. Each location on the map offers some kind of action to the players, but also contains many dangers. The Investigators must find the cultists, while they themselves have to escape from the Mi-Go which is devouring their last shreds of sanity.

Alone in the Dark

This is a single-player logical game where the player has to solve the mystery of sealing the otherworldly gates. The game gets harder with each passing round.