The players assume the roles of investigators working for the special department set up by the Massachusetts Bureau of Investigation and the Miskatonic University. The investigators have to work together in order to stop the schemes of the cultists. The latter aim to invite their masters, who reside in cosmic space and time, into our world through the opening of dimensional portals. Since the mere appearance of these Great Old Ones would be devastating, thwarting their followers is imperative — ideally before they even open the portals.

Each player chooses an Investigator with a unique upgradable ability. Each player receives their unique starter action deck.

In each turn, Cultists appear on one of the five Location Cards. The number of Cultists is determined by the circulating Cultist marker. Its position can be modified by several factors. Cultists who have appeared but have not been vanquished remain on their Locations. The Cultist die is rolled for every Location; its combat symbol is added to the strength of the Cultist appearing there.

In the next phase, the Terror marker moves forward: it influences the occurrence of terrifying events lying in wait for the players. The Terror marker can advance as an effect of played actions or as a penalty. It brings the special Event Cards of the Terror Circle into play, depending on their strength. The players have the opportunity to reveal, postpone or modify these events.

The Investigators roll their own dice and place them in the middle of the board, forming a shared pool. Then they discard their used cards and draw new Action Cards from their own decks up to their hand limit.

The longest and most important part of the game is the Investigator phase. Players determine where to move to, what local actions to carry out, and how to fight the Cultists. They can also decide to search for new equipment or to use other special actions. When fighting Cultists, the players can use their action decks, their special abilities, the support of their fellow Investigators, and an Investigation die – all these tools help the players to create the combination of symbols they need to defeat the Cultists. The Cultists’ values are modified by their own die rolls, their special rules or effects, and their Locations.

The cards in the Investigators’ action decks consist of two parts: magical symbols for combat – these can be used by the players themselves – and supporting effects that aid other Investigators. Whenever a player uses a card, they have to decide whether they want to use the magical symbol or the supporting effect. The uniqueness of Cultistorm’s cooperative gameplay is that the actions of a player’s cards can only be used by giving the cards to other players. There are no Action Cards with actions the players can carry out by themselves. During the game, players can also evolve the skills of their own Investigators and unlock special actions connected to certain Locations.

Once each Investigator has occupied his or her chosen Location, they play their actions in an order determined by their Locations: they search, fight, heal, or support other Investigators by using the options on their cards. When an Investigator defeats a Cultist, they receive a trophy they can later use in combat or to level up. The dimensional gates can also be sealed with these trophies, which is required to win the game.

CULTISTORM is a cooperative cosmic horror board game set in the universe of H. P. Lovecraft. 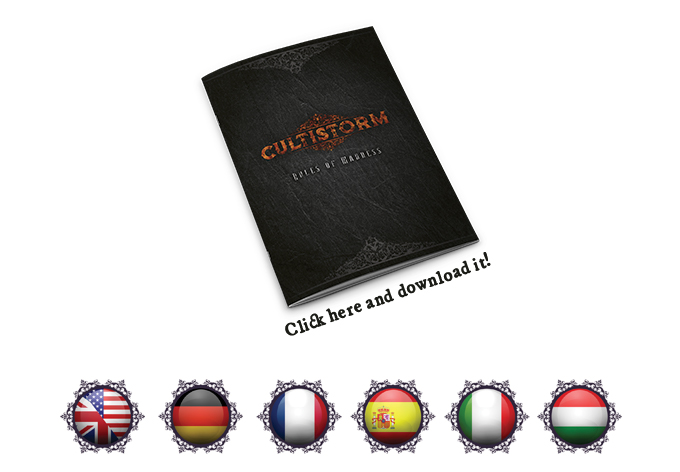 We promise to release official rulebook translations in German, French, Spanish, Italian, and Hungarian. These will be made available as PDF downloads.